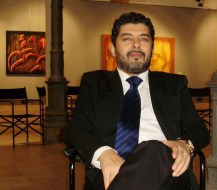 Giò Auletta was born in Italy.

After countless experiences in the art world, meeting artists, selecting, selling, exhibiting their works and being involved in the organization and publication of all forms of artistic work, he decides to permanently and exclusively devote himself to the creation of his own projects.

His technical and aesthetic choices as well as the use of materials are greatly influenced by his early contacts with that superb breeding ground for artists which goes under the name of Montefeltro.

He has the golden opportunity to meet students of the Italian masters of the 900’s, most of them in their late 40’s, privileged individuals who have known and collaborated with heavyweights in the likes of Giò and Arnaldo  Pomodoro, Attardi, Fiume, Valentini, Burri and many other extraordinary and timeless artists.

The use of marble dust, plaster, enamels and acrylics is a constant of his works on canvas, of any size, as well as in carvings and works on wood.

His work is characterized by extreme choices, from symmetrical lines representing scenes of pyramids suspended in the void and tridimensional figures pierced through one other, an analogy of the complexity of human nature, a relationship between men which is not always healthy, abuse against similar beings, to the representation of human bodies with exaggerated, yet gentle, traits, as to symbolize the beauty of the physical flaws of each man and the peculiar sympathetic identification through their exaltation.

And again, inanimate sequences of lines, endlessly repeated geometric figures and cyclic signs to capture the simple voices of eternal things, naked symbols made of sand and plaster fixed on wood and canvas through a patient work that creates and reproduces frames already stored in our mind, now seen in their metaphysical dimension of creations connected to the Universe and its primordial and permanent elements.

The moons, the stars, the earth, the city skylines, the grandiose works of men.

In executing this theme through his work, the artists expresses the hope of safeguarding what these symbols represent and raises a prayer to avoid their extinction.

Once again, the message here is a call to all men not to devote their minds to the destruction of our planet and all its marvelous heritage of eternal beauty.

Being aware of the tastes, the selective ability and the expectations of all who love this form of art, Giò Auletta focuses on delivering a message which is valid for everyone and everywhere through his creations, a message easy to understand which appears like an investment.

Several exhibitions of his work are planned in France in the future, pairing the number of works that have been published in the past, since the year 2000, on specialized magazines such as the monthly Arte Mondadori, including multiples, sculptures and unique pieces.

The wish to exhibit works of large dimensions, both on canvas and wood, and spread his message in all directions, have resulted in Giò Auletta’s close relationship with his passion for painting and a need to discover new and unexplored territories.

Besides his efforts to show his works in France and Northern Europe, now the artist is planning a show in the U.S., where a meticulous and intense promotion of the artist’s image and works is mandatory.

His  message transcends the single artworks he creates.

Giò Auletta if firmly convinced of the following truth:

The real sense which is never completely expressed is the artists’ great fortune of being able to express their opinions, judgments, statements, dissent, negations, dissimulations and proclaims through their works.

This is a fundamental aspect known by all artists who are committed to convey their own ideas to the world, yet there is an objective and intrinsic difficulty in communicating by using simple tools such as brushes, colors and plaster.

It is a perilous crossroad where those who create the works and those who are supposed to read them meet.

The poignant simplicity of the symbols that have come to us since the origins of history explains how our imagination could have interpreted an entire primitive world through a reading of rough references to primordial scenarios.

Despite the frantic technology rush of the third millennium, things are never ending, they repeat over and over and we are and will always be symbols.

Everything can be told through y axis, x axis and a circle.

All can be expressed through artworks created with a deliberate and sought minimalism.

The simpler the artwork, the more it communicates!

This is not a matter of vile opportunism, passion out of control, arrogance to indoctrinate the naive or betray the supporters of his works; on the contrary, this is simply the role impersonated by the artist, who deliberately wants to challenge himself.

Such is Giò Auletta’s thinking!

Find me on Linkedin: